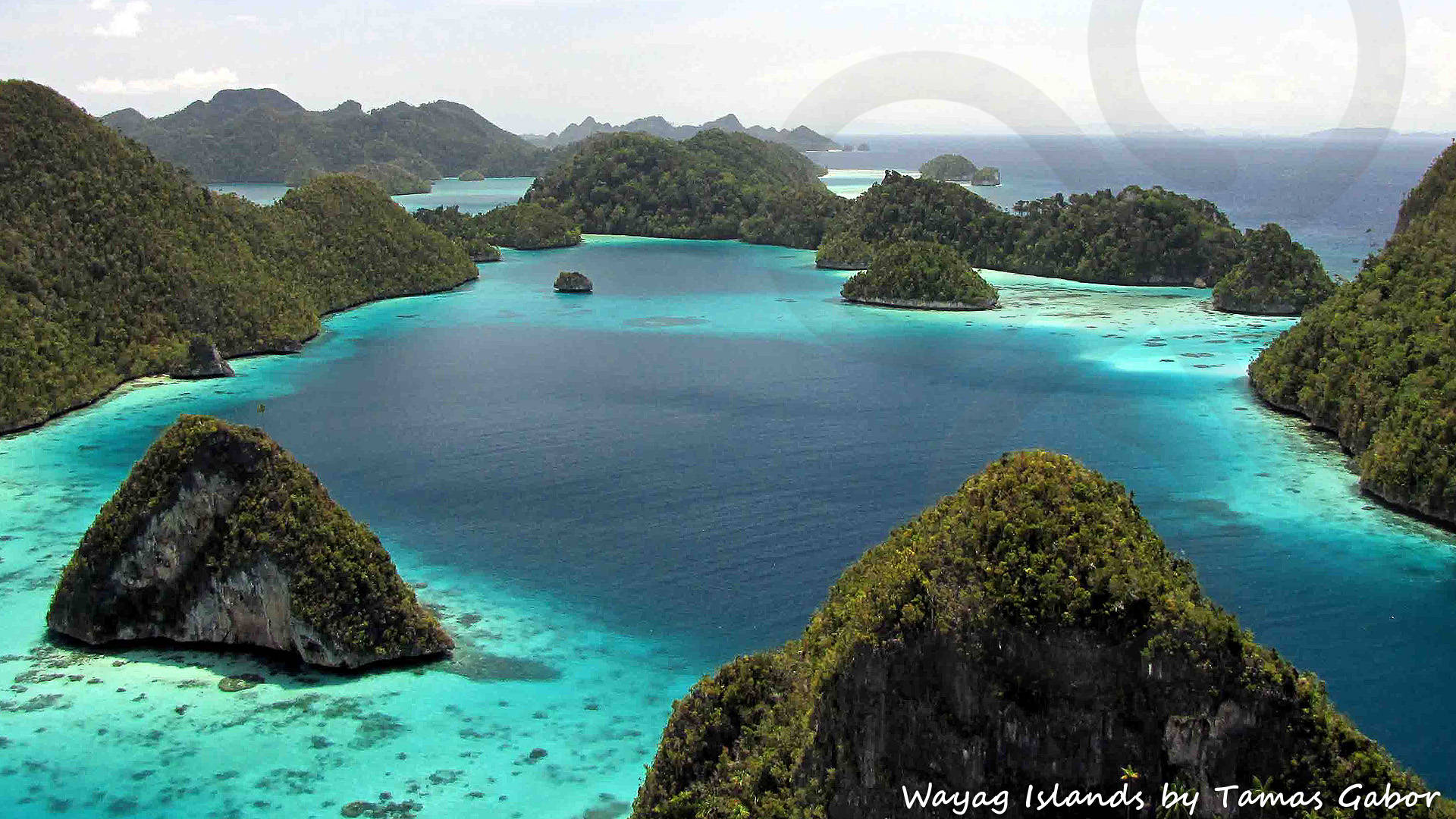 This panoramic view of limestone pinnacles and deeply undercut, toadstool-shaped islets in the Wayag group off northwestern Waigeo Island has become an iconic image of Raja Ampat. Copyright © Tamas Gabor

The climate of West Papua varies from equatorial with high rainfall and diffuse seasons, however commonly involving a double rainfall peak, to monsoonal in the Trans-Fly zone, where a short concentrated wet season and prolonged dry season is normative. Highly complex local variations exist in accordance with elevation and exposure to the prevailing winds at different times of year, obviously defying quick characterization in a few lines here. Certain regions, such as the Raja Ampat archipelago for instance, have also been proven to be particularly vulnerable to the influence of ENSO-events (El Niño Southern Oscillation), with restricted rainfall during El Niño warm phases and more abundant rainfall during La Niña cold phases.

In many locales, the mornings are clear and bright, with clouds building up by mid-day, and rain showers commonly falling in the early afternoon, often only towards dusk or overnight. Generally the drier season, and perhaps the optimum time of year for visiting, lasts from June through November, when southeastern trade winds can be rather gusty however. Remember that rain falls throughout the year in the highlands and is probably inherently unpredictable.

Our trekking tour to the Arfak Mountains of West Papua produced a rich array of highly prized and much sought-after birds and also lots and lots of rain. — Chris Doughty, Peregrine Bird Tours, Australia

At sea level daily minima range between 21-24°C throughout the year, whereas daily maxima, somewhat more variable due to cloudiness, average 30-34°C. On average, temperature decreases at a rate of roughly 0.5°C per 100 m elevation's rise. At 1,000 m above sea level expected minima and maxima are roughly 17°C and 26°C. Snowfall and frost are regular only above 3,800 m elevation. In topographic depressions, however, ground frost occasionally may occur much lower, in the Anggi Giji lake basin of the Arfak Mountains, for instance, as low as 1,860 m above sea level.

Relative humidity is constantly high, falling from above 90% at dawn to 50-60% in the afternoons. In the perhumid cloud-forest zone humidity rises to 100% on most nights. In contrast, in the Trans-Fly region it commonly drops below 30% at the height of the dry season in July-August.

The optimum time for birding in West Papua is essentially reversed to that of diving. Birding is most productive during the normal prevalence of southeastern trade winds from June through to September, when displays in the charismatic birds-of-paradise and bowerbirds are at their peak. Diving the fabled Raja Ampat Islands, on the other hand, is best undertaken during the normal northwestern monsoon from November through to April, when seas there are generally calmer and visibility better. The transition months of May and October are conducive to both activities.

We would love to hear from you at Papua Expeditions (EKONEXION)! Email us at manager@ekonexion.com or simply click on that address to automate your email app. We endeavor to respond to all queries within 72 hrs. If you have not heard back from us by then, please first check your 'spam' or 'junk mail' folder. If our response is not there, then kindly resend your initial communication. Many thanks! Finally, we do respect your privacy and hereby also guarantee that any personal information that you may submit via electronic mail will be kept strictly private and on no account shared with third parties.

www.PapuaExpeditions.com and www.bird-watching-papua-adventure-travel.com principally do not make use of any cookies for any purpose. In order to enhance viewing experience across widely varying screen sizes, these web sites use non-invasive media queries. You may, however, explicitly submit personal information via electronic mail. Papua Expeditions (EKONEXION) hereby guarantees that any information gathered in such manner will be kept strictly private and on no account shared with third parties.